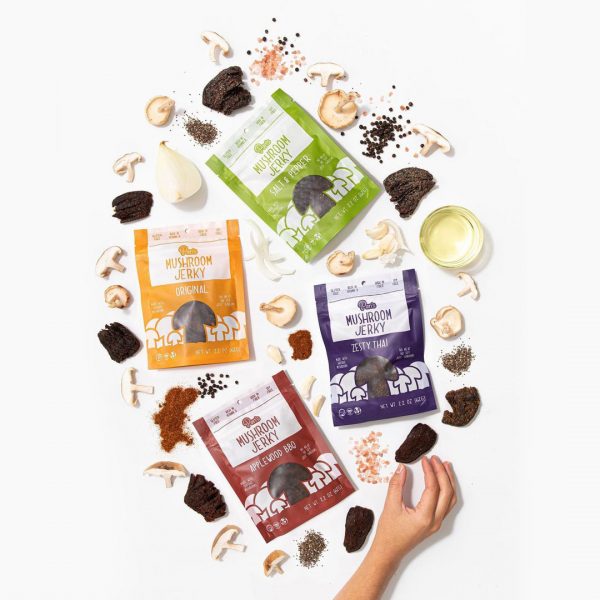 Meet mushrooms... Meat mushrooms? Yup. Pan's is taking the "jerk" out of jerky and holy "Shiit"ake mushrooms is it delicious. With a dense, fibrous texture and savory umami flavor, Pan's Jerky packs a punch without munch—ing on any animals. While Pan’s Mushroom Jerky doesn’t contain any meat, the flavor and texture of their jerky might make you do a double-take.

Sometimes it all “pans” out. We’ve had a few vegans on the bomb-squad so we were intrigued by the thought of a meatless jerky. Now… we know this can be a controversial topic, but we will have you know… even if you are a jerky junkie we believe you can get behind Pan’s. Maybe it’s a taste-trend or maybe it is the way of the future. That will be up to the world!

Pans got it’s start when founder Michael Pan visited family he hadn’t seen in years. Little did he know he would discover a recipe that had been in his family for decades. He learned that many of his family members are vegetarian Buddhists. Because of their diet, they craved vegetarian snacks that not only tasted great but also had a satisfying texture. They found that mushrooms were a great replacement for meat. Not only did it have great texture, but the mushrooms were natural sources of vitamins, fiber, and antioxidants.

• Pan's is Vegan, but is a satisfying alternative to meat. (although some of you might put that in the dislike list)

• No soy. No Gluten. High in Fiber. High in Vitamin D.

• Made with organic ingredients.

• It's actually delicious—in our opinion. (Zesty Thai is our fave.)

• They have a cool URL - mushroomjerky.com

• Featured on Shark Tank and funded by Mark Cuban.

• Sugar is added to the jerky—but it's added to meat jerky too depending on flavor.

• Have you ever noticed how every bag of food you've ever opened has a ton of wasted, open space inside? Pan's did nothing to change that trend. You could say there is too "mushroom" in the bag.